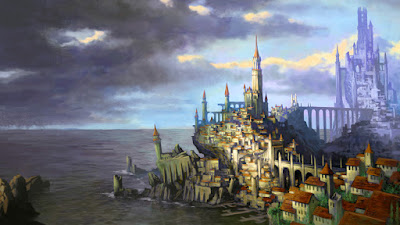 The Jewel of the North. Shattered by the Spellplague and then the eruption of Mount Hotenow. It stands now in the ashes of its past, rebuilt by its faithful citizens who have returned.

After so much abuse and neglect, much of the city’s architecture is damaged or lies in rubble. Recent repair efforts have given Neverwinter a patchwork appearance; slums are juxtaposed with new construction, all resting on the shattered remnants of old buildings. Yet the truth remains: city still stands, ever defiant in the face of a century of tragedies.

- The cast of the game

- Locales in the game

- Organizations that the characters encounter

- An index to terms, names and other vocabulary unique to the campaign.

Ascendant campaigns can view previous versions of their pages, see what has changed (and who did it), and even restore old versions. It's like having a rewind button for your campaign.

We've already been saving your edits, so if you upgrade now you will have instant access to your previous versions. Plus, you have our no risk refund guarantee , so there's nothing to lose.

I'm sorry, but we no longer support this web browser. Please upgrade your browser or install Chrome or Firefox to enjoy the full functionality of this site.